Professional Presence: 4 Times Your Body's Not Saying What You Think

Professional presence alert: Your body is yelling at us! Really! There you are, just trying to make a sale, or deliver some content, and the whole time your body is screaming something different that what you think it is. It can be a real problem.

When you don't pay attention to ensuring that your body language is supporting your message, you run the risk of it detracting from it. The difficult thing is that there may be certain body postures or stances that we think convey something other than what they actually do. These body habits can be especially hard to break when you actually LIKE these 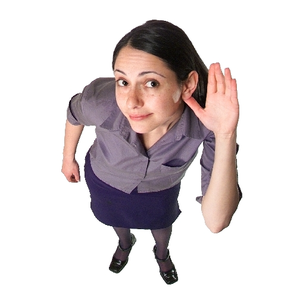 body postures, and believe that they are helping you.

I remember watching a video of a wedding or some such gathering with friends. Clearly, at the time, I had not been paying attention to my own physicality. What I noticed was startling.

I thought I was being calm and cool. What I looked was awkward, and uncomfortable. The camera would catch my darting eye contact, crumbling physical stance, and anxiously moving hands. I had no idea! It was a big wake up call to the difference that is clear when we pay a bit of attention to our presence.

4 times that your body isn't saying what you think it is:

What you think: I'm confident!

You've got the moves like Jagger. You like to plant your feet wide, beyond your hips, and land your arms akimbo, with balled fists. Or, you cross like a boss- arms crossed in front of your chest. On occasion, you'll pull the old "hands clasped behind the back of the head" maneuver, because that's just how you roll.

What your body is saying: I'm cocky.

Men tend to try and make themselves appear as large as possible, hence wide-spread feet and arms-on-hips. So gentlemen, this could be you. The problem is your audience can read it as a grab for status- you're telling us you're a little bigger and better than us. Arms crossed in front of your chest creates a barrier between you and the person you're speaking to- it says you're not open to this interaction. Next thing you know, you're body is saying "I'm cocky".

The Fix: Use that neutral position (find yours here), and open those gestures! Your audience will still perceive you as strong, but also as engaged and concerned about their needs.

What you think: I'm humble and approachable.

You don't want anyone to feel uncomfortable or overwhelmed by you. You keep your feet close together and clasp your hands low in front of you in what we call the "Fig Leaf" gesture. (Guess why!) You return your eyes to the floor often- after all, you don't want to appear confrontational. You're just a down-to-earth, humble person.

What your body is saying: I lack confidence.

If men tend to try and puff themselves up, women tend to try and make themselves appear as small as possible by pulling in those feet. So ladies, this one may be on us. The "Fig Leaf" and "Prayer Position" (hands clasped or steepled in front of your chest) are both protective gestures, even if you may think they seem sincere. You're hiding! And nothing will betray your confidence like avoiding a eye contact.

The Fix: Like above, find your nice strong neutral position and stop hiding behind your hands! If you're not gesturing, allow them to rest at your sides. Work on keeping your eye contact constant, rather than dropping it to the floor. It is a huge help to take a video of yourself, just speaking about anything you'd like, and notice where your eyes go.

What you think: I'm cool and energetic!

You're a high energy communicator! In fact, your body rarely stays still. You pace when you present, you fidget in one-on-ones, but it's just because you're so excited, and you want others to know! You're cooky and "out there". People just love your wild style.

What your body is saying: I'm scattered and unfocused.

We love what makes you a unique individual- your personal stamp sets you apart from everyone else in the world. Being an energetic communicator is great, until it crosses the line. Constant movement won't make you seem cooky and exciting. However, it might make your audience nervous to watch you!

The Fix: Try and embrace the phrase, "If I don't have anywhere to go, I don't have to move". Passionate, exciting movement is definitely allowed- as long as there is a reason for it. Movement without purpose is just wandering. Start to build self-awareness about jittery legs or anxious fingers in your face-to-face communication- it will make you appear scattered and with focus difficulties. Learn to channel that energy into strong gestures and movement.

What you think: I'm totally relaxed.

Nothing can phase you, and everyone should know it. You're Mr./Ms. Casual- hands in the pockets, leaning into one hip, shoulders thrown back. You don't need to push the energy- you're the original Joe Cool. People will trust you because you look so relaxed.

What your body is saying: I don't care.

There is a fine line between being perceived as relaxed and being perceived as blasé. The hip lean is a huge culprit- an acting professor would tell you that the minute you break your strong center and lean in to one hip or another, you are building a character that truly doesn't care about what is going on. Also, placing your hands in your pockets sends a message that you can't be bothered to fully engage. Throwing your shoulders too far back (in a way that is not just good posture...) literally creates a physical distance between you and your audience, whether in front of a group or just one person. You're detached.

The fix: Nothing says relaxed like a squared, easy physicality and allowing yourself to breathe! Try to avoid leaning of any kind, and take your hands out of your pockets. You'll appear relaxed without seeming uninterested.

Becoming aware of what your body is saying, and whether it's what you think it is, might not be easy. However, it's definitely worth the effort. Before long, your body won't be screaming something at us that's in opposition to your message. We'll see nothing but support.