I'm what you'd call a "classic overthinker". If there is something weighing on or occupying my mind (good OR bad), I can ruminate on it until it becomes a monumental challenge.

In the past, one of the times that I found that I would ruminate the most was when I had to have a difficult conversation at work. I would think, and think, and think about that conversation. Instead of just spiraling into worry, I now use some actual communication strategies to prepare for a hard talk in advance.

Do you ever do the same? Try some of these. They can help you prepare beforehand and keep things on track and productive during the actual conversation:

1. What's the goal?: It's easy to get lost in the details when you approach a situation only by saying "Well, I just have to tell him/her  ________________." What would you like the person you're speaking with to DO with this information? (Sounds like a Super-Objective, doesn't it?) What change would you like to see? This approach helps you work towards achieving something, rather than just saying words.

2. Make a list: Yes, this may sound simple. But chances are there's more to a difficult conversation than delivering one idea. Once you've articulated your goal (Super-Objective!) make a list of supporting ideas and major details. Beforehand, this will help you analyze what's really important, and what's not. During the conversation itself, it will help you stay on-point, rather than rambling.

3. Sort through the emotional component: If there were no emotions attached to a difficult conversation, we'd just call it a conversation. Be crystal clear with yourself about how you feel, and try to imagine what the other person in this scenario may be feeling: Are you angry? Hurt? Disappointed? Will this cause an extreme reaction in your listener? How do you think they might feel?

Once you've approached the emotional component, you can deal with it and avoid acting on it. It's ok to be angry, but for a productive conversation you've got to keep things positive in the moment. When you acknowledge how the other person may feel, you can recognize that this is hard for both of you.

4. Rehearse and release: Take that emotional component and brainstorm different responses you may get, and how you can keep things on-track and positive. Definitely take some time rehearsing this conversation, if you can. You don't have to memorize anything. You just want to be prepared, and keep things from getting away from you.

Then, release it. Once you're prepared, do your best to let the conversation go until you have it. If you continue to go over and over this talk, you may entrench yourself in unproductive feelings, rather than making a plan. Be prepared, but not emotionally raw. You'll keep things moving forward, rather than going off-track. 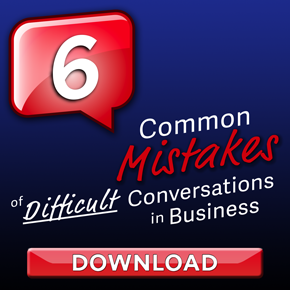