Even after all of these years, I can still feel the fear.

Recently, I was working on a play with a very short rehearsal process — twelve days, from first rehearsal to opening night. At this point in my theatrical career, I've worked on shows with lots of different rehearsal time frames and this brief schedule was nothing new to me. Since I'd done this before, I knew the demands going in; that you come in fully prepared ahead of time, (You better know all of your lines when you walk in the door!) and that you are ready to jump in with both feet the moment things get started.

Even though I had followed all of the required steps to the letter, on opening night I found myself feeling that familiar fear. Self-doubt and nerves started to creep in and take hold: did I really know how this play worked? Even though I knew my lines for weeks, the words suddenly felt strange in my mouth.  Entrances, exits, cues — the panic was setting in.

As I sat backstage, doing some stretches and warm ups (which did help tremendously!), I remembered something an acting professor said years ago. When you are feeling anxious, simply focus on talking and listening. Instead of getting lost in the who, what, when, where, why of what you're doing, think about being present, saying the lines, and truly listening to those around you.

When the time came for my entrance, I was doing a scene with an actor with whom I'd worked for years. I

focused on his face, looked him directly in the eyes, and simply said my line and listened for his response. Any time I felt the fear creeping in, I found another one of my colleagues on stage, and repeated the process. I could feel the stage fright drifting away, because my thought process was simple: look, talk, and listen.

This simplicity of focus, freeing yourself from anything but talking and listening, is an incredibly calming exercise. Think about a professional presentation you've given recently, or a meeting you lead, or a Q&A session which you facilitated. Leading up to the start, were you feeling panicky? Along with your warm up and general preparation, I would offer these thoughts when overcoming stage fright:

1. Start with your eye contact: Whether you are speaking to one person or an audience of one thousand, focus your gaze and attention on one set of eyes at a time as much as you can. It can be calming to think that, instead of presenting to a large crowd, you are tasked with simply connecting with as many sets of eyes as possible. Even on stage, eye contact makes you simply feel you are having a conversation, rather than giving a performance.

2. Just say the words: To communicate a message effectively, you need a clear, concise, and engaging speaker, and a listener to take it in. That's it.  Be conscious of the times when you can just simply speak and embody your content, rather than worrying about all of the surrounding bells and whistles, like slides and laptops.

3. Breathe and LISTEN to others: Many guided meditations start by asking you to just listen and take stock of the sounds in the world around you. This immediately brings you to the present; your mind starts to think about what those sounds are, rather than nerves, stresses or anxieties of the moment. Not only is this a great pre-presentation exercise, but it is important to carry this idea into all of your communication. Especially during an interactive meeting or a Q&A, allow the times  when YOU are the listener to be an opportunity for you to breathe and zero in on the issue being raised by the speaker. Even breathing will help calm your physical jitters, and active listening takes your mental focus off of your own nervous energy. 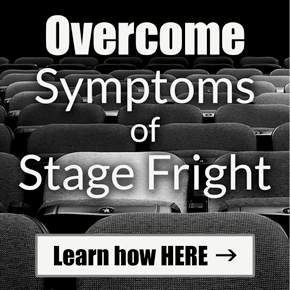 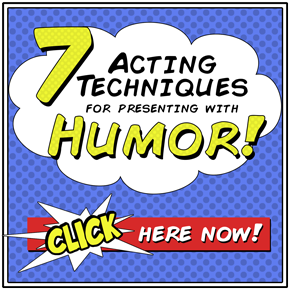