Presentation Techniques: Do You Really Know What You Want?

Lately, I've been catching up with a series from Showtime seasons past: The Borgias. I love watching good acting, and Jeremy Irons (as the complex Pope Alexander VI) is one of the best actors of our time. Surround him with a brilliant ensemble, and I'm hooked by all of the intrigue, plotting, and scandal of 16th century Rome.

What's always interesting to me when watching any great performance is how clearly the actors are pursuing their Objectives. In acting, Objectives are what the character wants overall out of the piece. (In Pope Alexander's case, to rule Rome and raise his family to the height of power.) Objectives are one of the Big Four Secrets of Acting, and part of the extensive pre-work done when an actor prepares a role.

Actors run into problems when they don't know, or can't clearly articulate, what their character WANTS. Performances become vague, shoddy, generic. They start to flounder, and fail at one of the most important jobs an actor has: affecting change in another person.

People talk a lot about "getting what they want" out of a presentation or interaction with another person. We 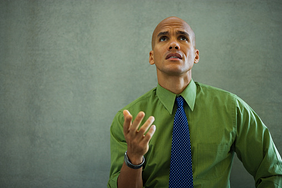 all like to use words like "influence," "persuade," and "impact." But so often, people walk away from these experiences having failed. They couldn't get people to come along for the ride, couldn't get them to "buy what they were selling."

Just like an actor with a deflated, vague performance, business communication can fall prey to a lack of specificity. We say we want to drive people to action, but do we really know what that action is? Do we really ASK ourselves what we want out of our communication? Do we really, specifically, KNOW?

Before your next interaction, take a moment and go on a brief quest for specificity. Ask yourself what you want out of your communication, and try to answer with a very specific verb. (Verbs are action!) If your answer to "What do I want?" is simply, "I want them to like this idea," think again. Do you want to inspire them to sign on the dotted line? To reason with them for understanding? To frighten them into compliance? (Ok, that last one may be a bit more aligned with the Borgias...) This direct specificity brings a razor-sharp edge to your communication — you're doing more than just speaking, you're pursuing an Objective.

The next time you're watching a favorite TV show, or movie, or even an athletic event (athletes are ALWAYS following very specific Objectives!) try to discern what those people are pursuing. Add this idea to your presentation techniques, and start to be more specific about your own Objectives.

How do you discern what you want from your communication? Let us know in the comments!

We know you'll enjoy learning more about The Big Four Acting Secrets for Wicked Presentations. Get your copy of our FREE eBook! 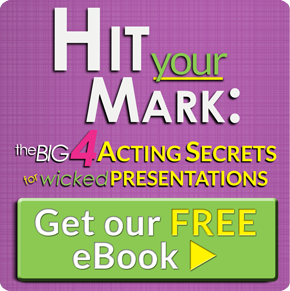